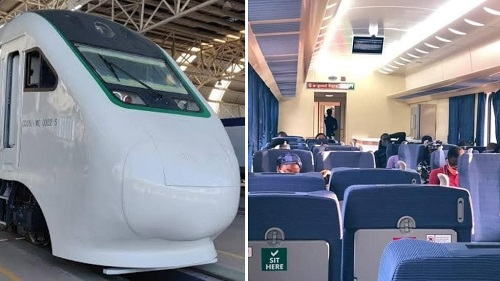 One hundred and sixty-seven (167) persons have been trained by the China Civil Engineering Construction Corporation (CCECC) to handle operations on the Lagos-Ibadan Standard Gauge. The trainees include engineers from various units of operations – mechanical, electrical, structural, as well as technicians and commercial division.

They will pioneer the technology transfer and also expected to train other workers in their divisions as part of the local content component of the contract on the Lagos-Ibadan train corridor. The one-month training is part of deliverables for the Lagos-Ibadan railway project by the CCECC for operators of the railway line -the Nigerian Railway Corporation (NRC) and the Federal Ministry of Transportation, on the various aspects of the Railway operations.

The trainees were tutored on the Subgrade and railway Structures, Permanent Way and introduction to various equipment, Stations and Communication, Signalling and Power Supply System. Deputy Managing Director of CCECC Xia Lijun said the training is part of processes to be observed preparatory to the final hand over of the Lagos-Ibadan railway system. Lijun said all participants were taken through the theoretical and practical aspects of the operations, and the study of various equipment available for the railway services.

Director of Rail Transport Services in the Federal Ministry of Transport J. A. Yusuf congratulated the trainees for being part of the operational staff of the Lagos-Ibadan railway modernization project. He said the programme will help the government’s aim of increasing local content and improve the technical knowledge of Nigerians in handling and operating its infrastructural assets.